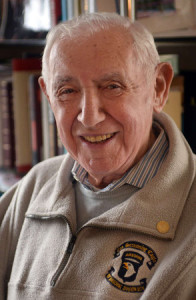 David S. Wisnia was a vocalist, composer, educator and beloved community leader. Later in life, he would use his powerful baritone to share with the world his remarkable tale of surviving the Holocaust through story and song, tracing his harrowing journey from young Polish singing star to Auschwitz prisoner to American liberator with the 101st Airborne. Cantor Wisnia’s remarkable singing voice helped save him in the Nazi concentration camp.

David was born in the town of Sochaczew, Poland on August 31, 1926. He was a star student of the Yavneh-Tarbut Hebrew School System and he had mastered multiple languages – including German, French, Yiddish, and Hebrew – by the age of 10. He received vocal training as a pupil of director/composer Maestro A.Z. Davidovich. David also learned from renowned Cantors Gershon Sirota and Moshe Koussevitsky, mentors who taught him how to blend Jewish tradition with an operatic style.

As young David’s singing career began to flourish, he and his family – father Eliahu, mother Machla, older brother Moshe and younger brother Dov – moved to the capital city of Warsaw. David was soon performing in synagogues, in theaters, and on Polish radio. But on September 1st, 1939, Germany invaded Poland and soon after, the local Jewish population was forced into a small section of the city that would become the Warsaw Ghetto. One day, David returned home to find his father, mother, and younger brother murdered by the Nazi SS. Eventually David was captured and taken by cattle-car to the Auschwitz-Birkenau concentration camp.

David was a prisoner of Auschwitz for close to 3 years. He stayed alive by singing to entertain the Nazi guards and cell block leaders. While in the notorious death camp, he composed two songs that became popular with the inmates. One song is in Polish, “Oswiecim” (Auschwitz), and the other is in Yiddish, “Dos Vaise Haizele” (The Little White House In The Woods). The songs are now on display at the Holocaust Museum in Washington DC. After being transferred to Dachau and surviving a Death March in December 1944, David managed to escape into the nearby woods. He was soon found and rescued by the American 101st Airborne Division. Joining with the 506th Parachute Infantry, he was adopted as their “Little Davey” and was able to put his language skills to work as an interpreter. He engaged actively in combat during the closing days of the war with Germany in 1945, transforming from a survivor to a liberator.

When the army brought him back with them to the United States in 1946, David set about building a new life in New York City. He began selling encyclopedias for the Wonderland of Knowledge company, eventually rising in the ranks to Vice President of Sales. He worked hard to support his wife, Hope, and their four children. He traveled often, but he always made sure to be home in time for Friday night Shabbat dinner – just as his father Eliahu had done for his family back in Sochaczew.

When the family moved to Pennsylvania, David and Hope helped grow a new thriving Jewish community in the Bucks County area. David served as Cantor of Temple Shalom in Levittown, PA for 28 years, and then as Cantor for Har Sinai Hebrew Congregation of Trenton, NJ for 23 years. After retiring, he remained an active part of the community, teaching classes on cantilation and Hebrew language, leading communities in prayer, and officiating for countless baby namings, bar/bat mitzvah ceremonies, weddings and funerals around the country. David also became a member of the American Conference of Cantors within the Union of American Hebrew Congregations.

David would go on to perform internationally, singing in Buenos Aires’ Libertad Synagogue, Israel’s Yad Vashem, and Warsaw’s Nozik Synagogue (1986) where he officiated at the first formal Bar Mitzvah ceremony to be held in Poland since World War II – the same synagogue where Wisnia sang as a choir boy over 70 years prior. David also performed concert tours with his grandson, singer/songwriter and pianist Avi Wisnia. Most recently, David returned to Poland to commemorate the 75th Anniversary of the Liberation of Auschwitz at a 2020 event attended by concentration camp survivors and prominent heads of state, which was televised to an international audience of millions. He frequently said that one of his greatest honors was being called up to sing the national anthem at the annual 101st Airborne Snowbird Reunion in Tampa, Florida, where veterans of World War II still called him Little Davey.

Towards the end of his life, David Wisnia found it increasingly urgent to share his experiences of living through the Holocaust. He published his memoir, “One Voice, Two Lives,” (2015) to ensure that this chapter of history will never be forgotten. His story has been featured in The New York Times, The Daily Mail, The Jewish Exponent, Buzzfeed, and in many other outlets around the world.

David led presentations about the Holocaust for audiences at synagogues, schools, and museums, and he was a frequent guest lecturer at Stockton University in New Jersey, at the invitation of Professor Douglas Cervi. David loved connecting most with students and young people, taking selfies with them, and imploring them to think about the impact they have on the world around them. When asked what he hoped the students took away from his story, he would say, “Do away with hate. Prejudice and hatred leads to death. There is a saying in the Torah: God tells Abraham ‘You shall be a Blessing’ and that is my message, that each and every one of us should ‘be a blessing.’ We should do good in this world, and be good to one another. Live a life with meaning and purpose, and leave this world a better place than when you entered it.”

One Voice, Two Lives, the memoir of David Wisnia’s powerful life story is now available, in conjunction with Comteq Publishing and Stockton University.  For more information or to send a message, please visit the CONTACT page.

Cantor David S. Wisnia had a remarkable voice, and he used it to tell his remarkable story. He was fluent in multiple languages and received his vocal training in his native Poland as a student of renowned Cantors Sirota and Koussevitsky. He served as Cantor of Temple Shalom in Levittown, PA for 28 years, and recently retired after 23 years as Cantor of Har Sinai Congregation of Trenton, NJ. David Wisnia was a member of the American Conference of Cantors within the UAHC, and continued to be an active vocalist, educator, and beloved community leader.

During World War II, when he was just a teenager, David became a prisoner of the infamous Auschwitz-Birkenau concentration camp, where he was held for nearly 3 years. After surviving several horrors in Auschwitz, David discovered that his singing voice would ultimately save his life. A daring escape lead him into the path of U.S. soldiers from the 101st Airborne who adopted “Little Davey,” taking him with them on their campaign of liberation through Europe. With their help, David Wisnia was able to immigrate to the United States. David’s story is unique: he is both a Holocaust Survivor and a WWII Liberator.